Six of us gathered in Wales once more.  Our host was the Speaker for the Land again, the others were the Lore Keeper, the Word Smith of Taranis, Hearts Counsel, Spirit Walker and myself.  All bar the Word Smith gathered on the Friday evening round the fire as we shared mead and talked into the night.

The next morning the Word Smith also joined us and we set off for our first trip.  In speaking for the land our host had chosen to take us to a few very different places.  The first of them was a cave of awakening by a river.  We had to wade or balance on stepping stones to cross the cold flowing waters.  I chose to cross on the mossy stones but barefoot with my trousers rolled up in case I lost my balance.  I didn’t fall thanks to the help I received but my feet did get very cold.  The water was so high that it was almost impossible to actually get to the cave and none of us felt the need to enter there so badly that we wished to risk a fall or a soaking in the pool in front of the cave.  It is a peaceful and healing place to visit even with the roar of the waterfall by the cave.

Next our host took us to another river above the village of Dolgarrog.  This river has a different personality altogether.  We stopped by another pool with a waterfall roaring into it and rocks you can sit on beside it.  As I clambered onto them I slipped and fell oddly wrenching my left thumb.  It doesn’t sound like much of an injury but the joint at the base of my thumb is still hurting almost a week later.  This seems to be a river that takes and gives pain. I did want to release something there myself but wasn’t expecting the price extracted first.

In a sheltered area among the rocks I took out what I wanted to burn with the others perched on the rocks around me.  I borrowed a knife from the Word Smith and first shredded the item into snaller strips of cloth.  In doing so I began to release some of the pain I had been holding in.  A few twigs were also passed to me and a lighter.  The others were a bit concerned that the fire wouldn’t light or not burn well but that was not the case at all.  As the flames devoured the cloth I began to calm.  Just as the last flames were beginning to die away it came into my head that I could use a short bit of branch that was also there to crush the remaining fragments and just as I picked up the stick the last flame died away.  I pounded the remains into smaller fragments and mixed them with the gravel there.  When the river is in spate that area is covered in water and the river will wash the remaining fragments away in time.  Then I went to the waters edge and washed my face in the cold waters of that pool. 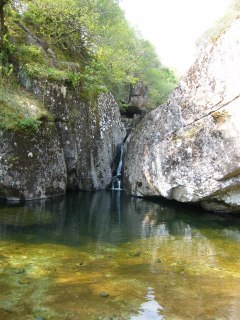 While I never said it aloud I was aware the whole time that the spirits of that place had given me pain, perhaps to help me release other things, but they had also provided just the right place, just the right things, the right conditions and there is no doubt in my mind that they accepted what I wanted to release given how well things burnt.  As I washed my face in the waters I silently thanked them for the release and asked for healing from the cool waters.  Just as we left the rocks, about to walk on down to the valley I asked the others to pause a bit.  I needed to thank them all for being with me and supporting me.  In the last two years these men have witnessed and supported me through some very personal and profound experiences and I am deeply grateful to them all for their care.  The last thing I did before we left that place was to turn to the area for a last look and to once more silently express my thanks to the spirits there.  It is a place of pain, yes, but pain too can be cleansing.

On we walked down towards the valley.  It’s a lovely walk through trees and round rocks and the beauty of the place was very soothing.  We visited the amazing ruins of an old village.  There are trees growing in what once would have been cottages.  I don’t have the words to describe the strange beauty of that place but it is a place where the otherworld feels very close.  There is a yew tree growing near by that called to me.  I’d been there before and it took something from me on that occaision although I don’t know what.  This time it felt like being gently enfolded in a loving embrace.  I stood there for a bit while the others were examining the ruins, Spirit Walker keeping a quiet watch on me and before I left I poured out some water as a thanks. 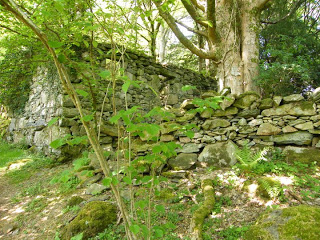 Ruins in the Woods

At the bottom of the walk we headed to a local pottery.  It’s owned and run by two lovely people and it’s another magical place.  There’s a home made water feature in the garden where a length of pipe fills with water and then pours out into a pool, that pool in turn has a little waterfall into another pool where there is something that strikes a little bell against a rock when the surge of extra water flows over it.  There are ceramic wind chimes hanging from the trees around the pottery and a large stone with a coiled snake carved onto it as if basking there.  The place itself has the most amazing window frames and it’s all done by hand.

The show room is a little Aladdin’s cave of wonders.  Goblets, bowls, teapots, lamps decorated with coiled dragons, green man plaques, more wind chimes and lots of other beautiful things.   I was incredibly tempted to buy myself an incense holder for joss sticks but didn’t feel I could really afford it, then Hearts Counsel brought it for me.  Isn’t that just wonderful of him 🙂 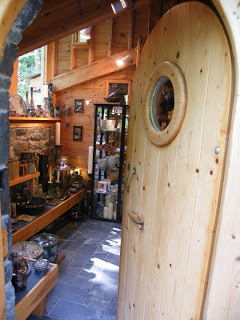 So we returned to the cars after a lovely walk and headed back to the tents after stopping to buy food for the evening meal.  By this time I was feeling drained and in need to a rest so I napped for a while and the others chatted.

Later the fire was lit and food was cooked and shared.  Sausages, burgers, fishcakes, rolls, tomatoes, strawberries, mini flapjacks and more mead and beer were shared.  The Speaker for the Land’s family also joined us and it was lovely to see the children playing in the woods in the evening light.  Once more we sat round the fire talking into the night before retiring to our tents to sleep.

The weather the next day was threatening rain and we had decided the night before to visit the Great Orme Mines so we set off late morning for this amazing and strange place.  The area open to the public is only a tiny fragment of this mine but it is enough to amaze you.  And yet at the same time I found this to be a very uncomfortable place to visit.  The information there quite clearly states that many of the mined passages are very small and that young children must have been the ones to mine them.  Personally I found the place to have an atmosphere of dispair, a sense of spirits who had been sleeping now being awoken once more and they did not feel happy.  So far human remains have not been found there but it’s a big place and much more of it is still to be excavated.  I’d be surprised it they don’t find some in there somewhere.  It is worth visiting but as I say personally I found it a very uncomfortable place and I’m not at all claustrophobic so it couldn’t have been that.

We went to the remains of a hill fort on the top of the Great Orme for a better look at the weather, then went to get food and go for another walk.  This time into the woods near where we were camped and to another area of hill fort remains.  Our host led us along animal tracks, up and over moss covered rocky outcrops, weaving through the trees until we came to this site.  This place felt peaceful and yet also full of energy to me.  I was drawn across it towards an oak tree growing on the other side of the fort area outside the remains of the surrounding wall.  At the foot of the tree as if waiting for visitors was a clear area just perfect to sit in, so I did.  For a while I just sat there and listened, let the peace of the place fill me.  Then I began to sing. Softly at first, wordlessly offering my voice, letting the song rise in me as it would.  I started swaying a little as I sat there too, seeing energies rising before me like a heat haze but the day wasn’t that hot.

Spirit Walker came and knelt behind me, silently offering support and strength.  As he did the song rose more strongly and my voice rang out.  As I sang I could hear overtones and harmonics echoing through me, piercingly high in my skull.  Then the song died down, faded away.  I don’t know what the others heard of that wordless song, whether they could hear the overtones I heard and felt or not.  It doesn’t really matter as the land about me would have heard and felt them.  I offered my voice and something accepted and for a while we sang together.

Me walking through the hill fort

After that we rejoined the others and walked back through the woods to a main footpath.  There our party split up, some to visit another site and myself and Spirit Walker to get fuel for the evening fire.  I was too tired for another walk by that stage and drained by all I had experienced over the weekend.

Later in the afternoon we all came together again and sat at a veiwing point near the tents.  The weather had cleared and brightened and we sat talking of Brython and enjoying the views across the valley until it was time to go a light the fire once more and prepare food.  Some time later baked potatoes were our dinner and a last bottle of mead was shared among us.  The next morning we would be packing up and leaving but for a while longer we had time to be with each other, to talk, to share, to connect.

My journey home the next day went well although it rained for much of the time.  It’s a long trip but not a difficult one and well worth making.  I really am getting very fond of that area of North Wales.

The slender threads that connect those of us that were gathered together are stronger now.  The places we have visited together, the food, the laughter, the time spent in each other’s company. These things bring us more strongly together as a community.

And for me the strength and support I have felt offered so generously, the caring, the simple warmth of companionship, of freindship as I went through emotional journeys as well as physical ones.  These are gifts beyond price and I consider myself truly blessed to have received them.


All photos in the above post courtesy of RedRaven.