For a while now I’ve been trying to find the time to post a little about my ordinary life.  It’s not easy to find that time but here I am with a bit of spare time.  I could watch the TV but I feel like writing, I’m not one for watching much TV at the best of times.

So Monday last week was my first day at work as a half time employee, only three and half hours of work to do a day and that should be easy you’d think but not for me.

Neil and I get up at 6.30 and I’m downstairs by 7.00 making packed lunches for the kids, Neil’s usually first down and either getting ready for an early start at work or checking emails etc before going for a walk in the local nature reserve while I get the kids awake and up.

At 7.20 I give the kids the first wake up call then leave them to wake a bit more while I have my breakfast.  At about 7.35 I’m back upstairs making sure the kids are awake and now getting up.  Rosie being only 5 needs more help getting ready for school than Rowan who just needs the occasional reminder to keep on task. Usually we are all downstairs at about 8.00 and it’s breakfast time for the kids, followed by cleaning teeth and getting school shoes on.  If Neil’s on a late start at work of off that day he usually comes back from his work about 8.15 ish

Rowan gets picked up by taxi with an escort each morning at about 8.30 and taken to his school, an autistic unit connected to a mainstream primary.  Once he leaves I or just walk Rosie to her mainstream primary school, if Neil’s able to he often walks with us too which Rosie loves.  It takes us about 15 minutes to walk to school and once there we wait with her until the pupil support assistants come out into the playground and let the primary 1 and 2 classes into the school.  Once she’s gone inside we head back home and I get into the car to head to work.

My work day starts at 9.30 and the main part of my work is departmental finances and most days I simply work though until I go home.  One Monday last week though we had an admin team celebratory tea break at 10.30 for one of the team that had passed her driving test earlier that morning.  At 11.00 my mobile phone rang and it was Rosie’s school, she was being very difficult and had hit and bitten her class teacher and support assistant again, and they wanted me to come and get her.  This time it was an official half day temporary exclusion, her sixth so far this school year.

Once I got her home she calmed down and was pretty well behaved.  Rowan arrived home in his taxi at 15.40 and then we went in to the more relaxed evening routines.  For Rosie that includes getting Neil to carry her upstairs to bed while I do the rest of the bedtime routines with her.  Rowan’s bed time routines are much simpler but as you might expected a bit later in the evening as he’s 11.

On Tuesday Rosie was back into school and I headed off to work as usual knowing I now had two hours I needed to pay back.  At 11.30 I got another phone call from Rosie’s school.  Again she was hitting staff and had bitten again and broken the skin of the staff member she had bitten.  This time she was excluded for the rest of the week and I now had three and a half hours to make up.

Fortunately my dad was able to come and look after Rosie while Neil and I were at work for the rest of the week.  I made up the hours I missed by working at home for an hour or so on Tuesday, Wednesday and Thursday afternoons.  The rest of the week went reasonably smoothly until Friday afternoon.

As Neil was on a day off on Friday and it was my weekend with the kids (they are with me one weekend out of four and with their father the other three weekends) he suggested I pop into Asda on the way home to get some more food in for the weekend.  Usually be the end of the week the fridge is pretty empty as the weeks shopping is most often done at the weekend.  This I did and as I was just beginning to drive out of the car park I got a call on my mobile from Rowan’s school – he’d had a bad fall and was extremely upset.  The only thing they could really get out of him was that he wanted me.  I dropped the shopping at home (we only live 5 minutes away from the Asda in the car and I had a few frozen things) and headed to the school.

Rowan was in a state of shock and very upset as well as being in some pain.  He just wanted to get home and have some paracetamol liquid (for his age group or course).  While I was concerned about his injuries as he’d fallen hard from a scooter onto his hands and knees there was no way he would have coped with a hospital A&E department so I took him home.

Once he had calmed down I was able to check him over and while both wrists were swollen he seemed to have some movement and I hoped it was sprains.  I told him we’d keep an eye on how the swelling went and take it from there.  When his father phoned that evening to talk to the kids I told him what had happened and he came round to see Rowan.  By that time Rowan was comfortable enough to leave his room and come down to talk to his father.

Rowan didn’t sleep well that night but I wasn’t expecting him to and the next day the swelling was no worse with no bruising and his mobility was improved.  He also said it wasn’t hurting as much so I thought it may be sprains in both wrists.  The weekend was relaxed with Neil at work.  Sunday afternoon on the weekends the kids are with me they go out for three hours with their father but Rowan didn’t want to go as he was still feeling sore.  My parents came round for a visit and my mum who is a retired nurse got her first look at the injuries.

She took one look at the swellings and said she thought that was bone injuries and that he really needed to be seen at a hospital.  We got things organised, left a message asking the kids father to keep Rosie longer so I could take him to hospital to be checked and my parents took us both up to Yorkhill Hospital for Sick Children here in Glasgow.  Neil finished work not long before we left so he was on hand at home and got the week’s shopping done.

So I finished a week that I had hoped would leave me with less stress and more time to get things done in a state of high stress and exhaustion regretting that I hadn’t got Rowan to hospital sooner but relieved things were sorted out before the breaks had really started to heal.

A couple of days on and Rowan is now sleeping well (which means I slept well last night too) and says he is pain free.  We are beginning to adapt to life with Rowan in plaster casts.  Rosie had a bad day at school on Monday this week and I had to pick her up early again but they kept her in school until I finished work.  Rowan is not able to go back to school although tomorrow we will be going along to a local morning out for his class at school and he’ll go in for his leaver’s assembly and special lunch on Monday 24th June.  (School ends for the year on 26th June round here).

While this is a slightly more extreme week in my life some aspects of this like phone calls from one school or another happen practically every week and as Rosie has now had seven exclusions in her fist year at school I’m getting far too used to that process too!

And to close here’s a couple of photos of the injured one in his plaster casts. 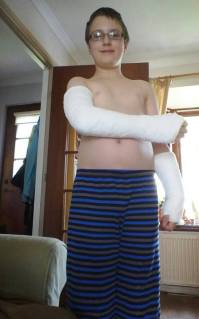 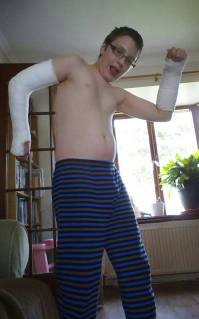